Required cookies are essential to let you move around the website and use its features, such as accessing secure areas, shopping baskets and online billing. These cookies allow our website to provide services at your request.

Functionality cookies are used to remember the choices you make, e.g. your user name, log in details and language preferences. They also remember any customisations you make to the website to give you enhanced, more personal features.

Targeting cookies collect information about your browsing habits to deliver adverts which are more relevant to you and your interests. They also measure the effectiveness of advertising campaigns.

This site uses cookies and related technologies for site operation, analytics and third party advertising purposes as described in our Privacy and Data Processing Policy. You may choose to consent to our use of these technologies, or further manage your preferences. To opt-out of sharing with third parties information related to these technologies, select "Manage Settings" or submit a Enquiry request.

Taking the pioneering spirit of the Stelvio SUV to a new level, the new Alfa Romeo Stelvio Quadrifoglio is designed to offer exceptional power and handling in the practical form of an SUV. With driving dynamics inspired by the Alfa Romeo Formula One cars, it delivers thrilling performance to a family vehicle, ensuring everyone can enjoy the ride.

The Stelvio Quadrifoglio’s performance isn’t the only element that’s inspired by the Alfa Romeo F1 team. From the muscular bodywork to the aerodynamic profile, the SUV takes on design cues from the Alfa Romeo racing cars, incorporating its sporting heritage into its aesthetics. Air intakes in the bonnet, sculpted bumpers, and 20-inch alloy wheels all enhance this sense of speed, while the ‘trilobe’ grille ensures it’s unmistakably Alfa.​

Passion in the details

Whether it’s hairpins or instrument panels, those lucky enough to get behind the wheel of the Stelvio Quadrifoglio will appreciate the way it handles contours found inside and out. The cockpit offers superb attention to detail and exclusive materials have been used throughout. Natural leather with contrast stitching luxuriously frames the dash and carbon fibre inserts are a tangible reminder of the Stelvio Quadrifoglio’s incredible performance. Superb heated Sport seats reinforce the attention to detail with 8-way power adjustment, 4-way power lumbar adjustment, power bolster with extra thigh support and exquisite leather and Alcantara upholstery. For the ultimate sport feel, optional Sparco Carbonshell Sport Seats elevate the race-inspired Quadrifolgio to a new level, immersing the pilot and passengers into a race-like experience.

The centre console has been reimagined with a completely new layout, updated controls, and new Tricolore badge. A convenient new wireless charger has also been added, keeping the cabin free from cable clutter.

Total control and precision, from the tyres to technology: The Alfa Rotary Pad and new 8.8” Multi-Touch display provide all the multimedia and information you could need with just a few simple clicks or touches. The infotainment has been enhanced in every way, with more powerful internal components and a completely re-designed interface its now faster and more intuitive than ever. Dynamic widgets provide user-friendly access to navigation, vehicle telemetry, multimedia and much more. Wireless charging ensures the Stelvio Quadrifoglio's cabin is free from unnecessary cable clutter.

The Stelvio Quadrifoglio's V6 Bi-Turbo petrol engine delivers an incredible 510hp and 600Nm of torque resulting in a jaw dropping 0-62mph time of just 3.8 seconds. Thanks to its aluminium construction and advanced technology, the Stelvio Quadrifoglio's engine not only delivers extraordinary power but is also incredibly efficient. Systems such as the Patented cylinder de-activation system (CEM) and coasting function help reduce CO2 emissions and fuel consumption even further.

One of the lightest SUV's in its segment, with the Stelvio Quadrifoglio there is no compromise. Thanks to the use of carefully considered materials, the Alfa Romeo Engineers were able to achieve a perfect 50:50 weight distribution, one of the Stelvio Quadrifolgio's most unique features. Combined with a best in class steering ratio and AlfaLink suspension, the result is peerless agility and driver pleasure.

Just ahead of its launch, the Alfa Romeo Stelvio Quadrifoglio claimed the title of world's fastest production SUV, setting a new benchmark lap time at Germany's legendary Nürburgring. The circuits picturesque location and fear inducing curves earned it the nickname "The Green Hell" and it has long served as the ultimate test for even the most courageous racers. Lapping the 13 mile Nordschleife (north loop) in a record 7 minutes 51.7 seconds. This new benchmark time is a full eight seconds faster than the previous production SUV record. This astonishing time wasn't achieved at the expense everyday comfort however, the chassis is compliant and versatile enough to ensure a comfortable ride on the road.

Watch the record breaking lap below. 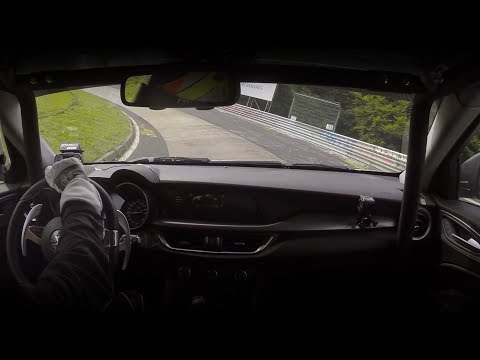 The Stelvio Quadrifoglio features a host of advanced safety features include Forward Collision Warning, Autonomous Emergency Braking, and Blind Spot Monitoring. The Integrated Brake System not only reduces weight but also provides an immediate brake response and a class-leading braking distance. Forward Collision Warning uses sensors to warn the driver of potential collisions and will apply the brakes to bring the vehicle to a stop if the driver does not respond.

With the optional Driver Assistance Pack, the new Stelvio Quadrifoglio has mastered the art of finding the balance of hands-on driving passion and cutting edge automated driving systems. All the below features are included with this pack. 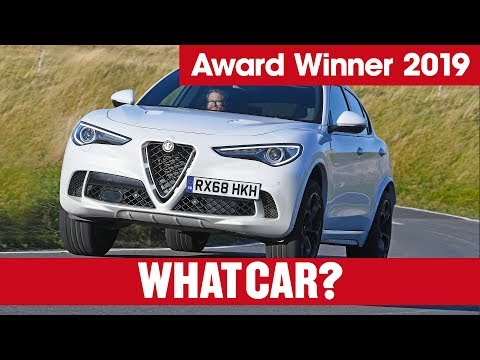 To discover the Alfa Romeo Stelvio Quadrifoglio or any of the other new cars available at Thames Motor Group, contact us at our Tunbridge Wells and Slough dealerships today. We can offer directions to our locations, talk you through our models, and accompany you on a test drive. To stay updated with all the latest news from us, visit our Thames Motor Group YouTube and Facebook pages.

We have offers across the range and we are here to help find the best offer for you. We can also tailor a finance solution for you and also organise your part exchange. Please contact us for more information on our great range of offers. Make an Enquiry
Would you consider a used car from stock? View our pre-owned cars
Finance Options We have a range of finance options available to help you find your perfect new car. Click here for more information or to ask us a question. Find Out More
Part Exchange Valuation When the time comes to upgrade or change your car, you want to be reassured that you will be given a fair and accurate quotation for your car. We will guarantee to do just that, providing you with a no-obligation quote that reflects the true value of your vehicle. You can then use the value if your current car to offset the cost of a new car, giving you the chance to drive one of the latest models for an incredibly competitive price. Get a Free Valuation
Book a Test Drive Today We understand that choosing a new car is an important decision. So what better way to experience it than with a test drive. Get in touch to arrange your test drive so you can get behind the wheel. Book Now
Your Next Steps
Make an Enquiry
Book a Test Drive
Find a Dealer
Used Stock Search
Contact Us

Whatever your question or feedback we are here to help. So please feel free to contact us

Make an Enquiry
Contact Us
Join us on Social

Immerse yourself even deeper. Visit our social channels


Calls may be recorded for training purposes.

Thames Motor Group (Slough) & Thames Motor Group (Tunbridge Wells) is an appointed representative of ITC Compliance Limited which is authorised and regulated by the Financial Conduct Authority (their registration number is 313486). Permitted activities include advising on and arranging general insurance contracts and acting as a credit broker not a lender.


We can introduce you to a limited number of finance providers. We do not charge fees for our Consumer Credit services. We may receive a payment(s) or other benefits from finance providers should you decide to enter into an agreement with them, typically either a fixed fee or a fixed percentage of the amount you borrow. The payment we receive may vary between finance providers and product types. The payment received does not impact the finance rate offered.


All finance applications are subject to status, terms and conditions apply, UK residents only, 18’s or over, Guarantees may be required.